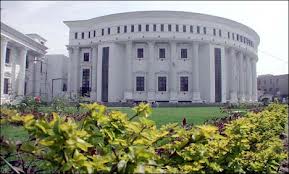 The Khyber Pakhtunkhwa Assembly on Thursday passed the Local Government Bill, 2013 providing for establishment of village and neighbourhood councils through non-party based polls, a move opposed by the opposition.

Of the total 127 clauses of the bill, the House unanimously passed 125 as reported by the select committee on the local government, while the opposition was against only two clauses, which were related to the village or neighbourhood councils.

The opposition parties, including Jamiat Ulema-i-Islam-Fazl, Awami National Party, Pakistan Muslim League-Nawaz and Pakistan People’s Party, opposed the bill’s Clause 26 and Clause 27, which provide for the establishment, composition and election of village and neighbourhood councils.

The opposition also rejected the holding of election at village and neighbourhood council level on non-party basis, fearing it would encourage horse trading.

Despite requests by the treasury, the opposition did not withdraw their dissenting opinion about the two ‘contentious’ clauses. These two clauses were put to voice vote and were passed with majority.

By passing the bill, the assembly has repealed the Khyber Pakhtunkhwa Local Government Act 2012, which was enacted by the previous ANP-led provincial government and was considered similar in many aspects to that of the local government law introduced by the Ziaul Haq-led military regime.

Minister for Local Government Inayatullah Khan termed the new law a “historic document” which would ensure administrative and financial autonomy at the grass root level and would empower people in real term.

He dispelled apprehensions of the opposition that holding elections on non party basis at the village and neighbourhood council level would weaken role of the political parties and would also create disputes at the village level.

The minister assured the House that the provincial government would provide 30 per cent of the annual development programme to the district governments and the village councils.

Maulana Lutfur Rehman said in his dissenting note said village and neighbourhood councils were alien ideas to the electorate and therefore, they should be replaced with longstanding and familiar phenomenon of union councils under proportional representation on party basis.

Sardar Babak asked the government to incorporate amendments of the opposition in clauses 26 and 27 in order to pass the whole bill with majority.

He said the opposition might challenge the establishment of the village and neighbourhood councils in the court if the government did not replace the two controversial clauses (26 and 27).

The government accommodated eight amendments proposed by the opposition members.

The bill will be called ‘The Khyber Pakhtunkhwa Local Government Law, 2013’, and will be aimed at constructing and regulating local government institutions in the province and to consolidate laws relating to these institutions and to provide for matters connected therewith and ancillary thereto.

The new law defines that a village council shall be an area comprising one or more muaziaat or in the case of an area where revision of settlement under the law has not been taken, one or more census villages. It says that the area of village and neighbourhood council shall be a territorial unity.

There shall be a district council in each district which shall consist of general seats, seats of reserved for women, peasants, and workers, youth and non Muslims as provided in Part-A of Second Schedule to this Act. The district council will approve master plans, zoning, land use plans including classification and reclassification of land, environment control, urban design, urban renewal and ecological balances.

Major functions of the tehsil and municipal administration are to monitor and supervise performance of functionaries of government offices located in the tehsil and hold them accountable by making inquiries and reports to the district government or as the case may be, government consideration and action.

The village and neighbourhood council shall be comprised ten to fifteen members including five to ten members, determined on the basis of population, elected to general seats, two members elected to seats reserved for women, one seat for peasants and workers, one for youth and one for non-Muslims.